This two-volume manuscript, totalling over 800 handwritten A4 pages, can be found in the Documentary Collection of the Archives of the National Council for the Securitate Archives. It was written during the early 1960s by 105 members of the Collective of Cultural and Educational Clubs at Aiud prison. These prisoners had been charged with being associated with the fascist Legion of the Archangel Michael, also known as the Iron Guard. They wrote this book as part of their “re-education” before being released as part of a general amnesty to political prisoners in 1964. A number of memorialists later accused Valeriu Anania, the future Metropolitan of Cluj, Alba, Crişana and Maramureş, of being the primary author of much of the book, but it was clearly a collective effort and a close examination of Anania’s own secret police files suggests that he only wrote small sections of the book. Moreover, almost every page contains rich, hand drawn illustrations by different prisoners, many of whom signed their artworks. Both volumes are bound in leather and engraved with silver, making them look like medieval Bibles.

The book purports to be a history of the Legion from 1919 to 1944, followed by a long epilogue describing prison life and the re-education program at Aiud between 1959 and July 1964. Unlike the stories told by legionaries during the 1930s and 1940s, however, this book is full of salacious gossip. It begins by attacking the leader of the Legion, Corneliu Zelea Codreanu (1899-1938), claiming that his ancestors were not Romanian, that his father was a hypocrite, alcoholic, a child abuser, and sexual pervert, and suggesting that Codreanu in turn had inherited these traits, and more. All of Codreanu’s promises and actions were fabricated, the book claimed: “Codreanu was not just a photogenic actor, he was a great director” who “only thought of theatrical solutions” to any given situation. Legionaries spoke frequently about having a divine mission during the 1930s, and the book’s authors did their best to undermine these claims. “Codreanu made God into an ally, dumping all responsibility for his actions on Him”, they wrote. “He became aware of a divine mission and behaved accordingly”. Attacking Ion Dumitrescu-Borşa, one of the most prominent priests involved in the movement, they wrote that “he took a mistress and worked harder to convert glasses of brandy than people who had strayed from the ways of the Church”.

First in 1941 and then again during the late 1950s and early 1960s, some legionaries survived torture and the hardships of prison life by embracing ascetic prayer. Known as “the mystics” by the other prisoners, their spiritual experiences become somewhat legendary and continue to encourage people to see the Legion as a religious movement rather than as a fascist movement to this day. The book has especially harsh words for these mystics, describing their spiritual practices as “holy legionary madness” and calling them “fanatics”. Although it does reflect genuine factionalism amongst legionary prisoners, the book was first and foremost an attempt to force the prisoners to slander those things that they considered most sacred. By accusing themselves of hypocrisy and perversity, the logic went, they could prove that they no longer harboured attachments to fascism and were ready to reintegrate into socialist society. 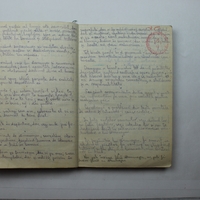 Religious poetry and aphorism from the Romanian Legionary group "the mystics"

This project has received funding from the European Research Council (ERC) under the European Union’s Horizon 2020 research and innovation programme No . 677355