These photograph come from a surveillance file opened in 1974 on Sescu Petru, a local amateur historian and folklore collector from the Catholic village of Săbăoani (Szabófalva in Hungarian) who was suspected of "nationalist-chauvenist" activity. Sescu Petru belonged to the local Hungarian minority referred to as Csángós in Hungarian. In August 1974, Sescu Petru was visited in his home village by Laios Pușkaș (Puskás Lajos in Hungarian), a retired history and Latin teacher from Cluj (who we can see seated in the first image). According to the secret police, while they were visiting different people in the village and the neighbouring village of Pildești (Kelgyest) on a borrowed horse and cart and "taking photographs and making recordings on a tape recorder", they were intercepted by the local police who confiscated their equipment and ordered Puskás Lajos to leave Săbăoani immediately. The cassette and film were later returned after the recordings and photographs had been deleted. According to the police report, all of those who had been photographed by Puskás Lajos were identified and later called in to the police station for interrogation.
The secret police noted in this case that "nationalist Hungarian" activity, including "the collection and use of distorted ethnographic and folkloric data from the region populated by Csángós with which they demonstrate their Hungarian origin" was increasing and that the "the Moldavian Csángó problem", the "denationalisation and Romanianization" of Moldavian Hungarians, was "being raised frequently by Hungarian citizens of Romania and by foreign interested parties with international organs." In the light of the secret police interpretation of these images, seemingly harmless photographs of local village life and people wearing folk costumes are implicated in an international conspiracy to undermine the image of the Romanian state abroad. 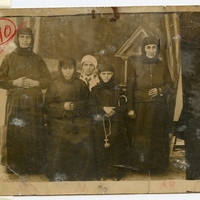 This project has received funding from the European Research Council (ERC) under the European Union’s Horizon 2020 research and innovation programme No . 677355